By Christian Svensson July 17, 2019
The last few days have been eventful. I was contacted by the datacenter that the mainframe's cage is now ready for moving in, and the power has been made available. Very exciting! I grabbed my home-made power cables (more on that later) and my best screwdrivers and set off to the datacenter. 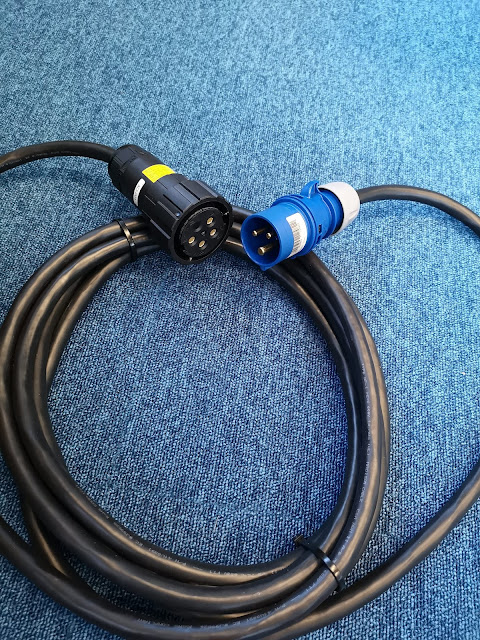 The datacenter staff, not needing a forklift in their day-to-day, had managed to solicit the services of a forklift, the associated operator, and some very handy folks to help navigate the mainframe from the storage space to its final location.

After some intense period of fighting the inclination of the road between the storage facility and the cage (and a door that was a bit too small) it was finally in place. Incidentally we were forced to trust the wheels on this pretty rough floor. I did not expect it to roll that well on raw concrete, I was pleasantly surprised. This thing is a tank!

Now, everybody wanted to see if it was working. My machine did not come with a power cable so I had to source one myself. The various guides did hint towards how the phases are connected to various Bulk Power Regulators (BPR) but nothing was very definite. I tried to do my best to construct a power cable, choosing to attach a classical CEE 230V16A connector at the end.

The connector is a GT06PCM32-ARS-30(29R) with the following pin/phase mapping:

Now, I assumed that given there is no neutral it has to be a delta system where one BPR is powered by the voltage between e.g. A-B, the next one B-C, and the final one C-A. That would make the "balanced power" configuration that comes with all BPRs make sense from a three phase perspective. One thing to note about the phase-delta connection is that in a normal three-phase system in Europe you have 400V between the phases and 230V between phase and neutral. Sadly this was a neutral-less system and we do not have 400V, so what to do?

Turns out that in the US the phase-neutral voltage is 120V as commonly known, which by luck is 240V phase-phase. My hypothesis was that we should be able to attach our 230V neutral to Phase X and phase to Phase X+1. The resulting delta would look like a two phase delta from the US.

At least I was pretty certain that if something did not hold, the mainframe should probably not turn into a cloud of magic smoke.

I confirmed the wiring scheme with some friends I have that do the power installations at Dreamhack, and even had them do the wiring as they have all the qualifications needed to do so safely and legally.

Did it work? Yes! It absolutely did! The uncertainty was which phase-pair powered the lowest BPR? I guessed A-B and, thankfully, that appears to have been correct!

That was a big relief. A lot of things could had happened making it so that the mainframe would not power on. Thankfully it seems the stars aligned in this case. Given that the seller of this particular mainframe was not equipped to power it on this had been a big concern of mine. Very happy to have that behind me.

There was one final thing to do, to anchor the mainframe to ensure it does not escape or fall over somebody. It does weigh a steady 700 kg after all. We found a wrench that was a bit oversized but did the job well :-).

What's next? The datacenter still needs to install some shelves for my router and all storage gear, that will likely happen in August. Until then I would love to play a bit with the Support Element and HMC, luckily the SEs are laptops and can be removed.

As I'm writing this a computer next to me is taking a backup of the harddrive in one of the SEs, and I will use that image to do some experimentation and playing with it to see how it works.

As always, thanks for reading - until next time!